If you’re considering growing yourself some Gorilla Glue version and looking for the information regarding this strain, you’re lucky because there’s tons of info. We did our best to gather it all in one Gorilla Glue strain review. We’ve also provided you with a choice list of the more popular GGs out there. And if you’re looking for an autoflowering version, rather than a photoperiod one, read about Auto Gorillas here.

Gorilla Glue Strain Review: Why Is This Weed So Popular?

The strain was named after the well-known American glue brand, so you may guess the main reason this marijuana variety became so famous. The resin production on buds, ‘sugar leaves’, and even larger fan leaves, branches and stalks, is really prodigious, and makes the plant very sticky. As a result, these genetics became an international phenomenon. There are many Gorilla Glue Strain names, or sometimes just numbers that point to this or that of the original phenotypes. Among those numbers, #4 stands out as the most desirable of the bunch.

As any graduate of the Weed 101 course will tell you, elevated resin production means psychoactive power. It’s because the resinous glands—which so richly cover various GG versions—contain THC and other mind-altering cannabinoids.

Different seed breeders make different statements about the THC levels in their creations, but we have yet to find one that has less than 18% in the weakest of phenos grown in the least favorable conditions. Most seeds out there come with a promise of THC at least in the mid 20s, often in the higher 20s. No doubt, the best of growers can achieve 30% with an especially promising pheno.

Keep in mind that for most Gorillas, CBD levels are very low which means there’s nothing to hold back the raw power of this beast.

The reference Indica/Sativa ratio for GG is 60/40, and in different strains it oscillates around this mark. Still, some crosses with other genetics can stress the indica or sativa side. So the type of effects can range from physically relaxing to energizing. However, for newbies, it’s practically always a deep couchlock (although accompanied with mental stimulation). Imagine your body perfectly still and your mind roaming the farthest reaches of the Universe.

The flavor is marked by an utmost complexity. Even in any one particular strain, it’s hard to find a name for every note and hint and nuance. And different strains can be totally unlike each other. Some remind Kush with its smell and taste of pine and diesel, others have fruity and berry-like influences. More exotic whiffs of coffee and chocolate are also very common. In any case, you can count on its being a real treat for your nose and taste buds.

Also keep in mind that so much resin makes Gorilla a very smelly strain. It will fill with pungent stink your whole house during flowering and especially drying and curing. So be prepared and equip your grow room with carbon filters.

You’d think that high resin production and raised levels of THC will be enough to make a strain of weed a hit, but this one also brings in yields well above average.

The buds are big and dense, and, as a result, very heavy. Besides, the plants tend to grow a lot of side branches which means a lot of bud sites. You can use this tendency to grow even bushier plants if you use topping, fimming, LST, and ScrOG. Just don’t forget that some lower branches will have to be pruned. The same goes for smaller branches inside.

Gorilla Glue’s creators are Don ‘Joesy Wales’ Peabody and Ross ‘Lone Watty‘ Johnson from the state of Nevada. They didn’t breed their masterpiece on purpose: it was a lucky accident in their garden. A Chem’s Sister grew some pollen sacks and pollinated a Sour Dubb. The breeders decided not to throw away the seeds, but give them a try. The result was outstanding and was named Gorilla Glue number 4. Later, other noteworthy strains were made in a similar fashion: among them the particularly sought-after #1 and #5.

Our Gorilla Glue strain review wouldn’t be complete if we didn’t mention the branding controversy.

The glue producer from Ohio with the same name was not happy that their brand was put on top of a pot strain, so they decided to sue the breeders. The latter eventually lost the suit, and have renamed all their creations to GG. However, as you may find out yourself, other breeders, seed banks, and seed shops still continue to market these genetics under their original name.

Gorilla Glue Strain: How to Grow for Best Results

We have already mentioned that most varieties in the Gorilla Glue family are high-yielding and that their potential can be further enhanced by various techniques that make the plant structure more branchy.

The disadvantages of growing this strain are:

So try to create a stable environment for your plants, without stresses and regularly check for male flowers if you want a harvest free of seeds.

The strain isn’t really finicky, but some previous experience wouldn’t hurt either. So we advise first time growers choosing an easier-to-grow strain. Or else prepare for subpar results in terms of yield and bud structure. Still, even in inexperienced hands, the buds will be resinous as hell.

We are happy to tell you that Gorillas grow very fast during the vegetative period which enables shorter grow cycles and a faster turnover. The flowering time is also comfortably short – 8-9 weeks in general. However, some fancy hybrids with dominant sativa genes may take a couple of weeks longer to mature.

The Long List of Gorillas: A Plethora of Variants

For your convenience, we have compiled a list of 7 strains that you can buy at an affordable price, ordering your pack of seeds from anywhere in the world, including the US. And if you live in the UK, the package will arrive at your doorstep in no time, so that you can pop your Gorilla seeds ASAP and start growing. Just choose a version you like and follow the link. 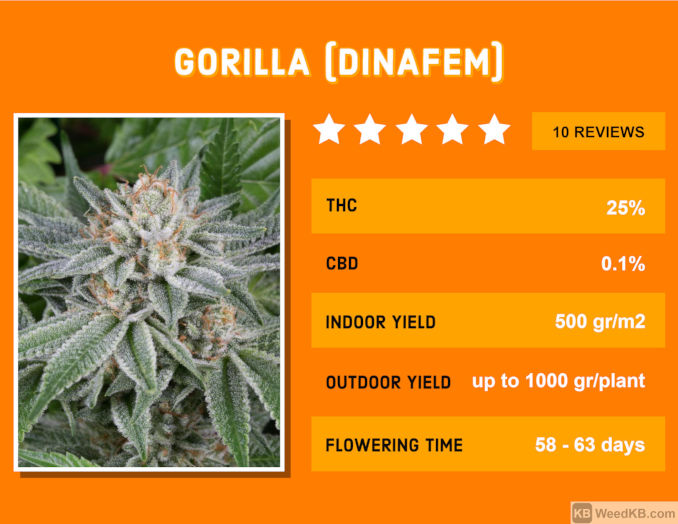 Dinafem’s Gorilla grows into big branchy bushes that require some pruning and defoliation at the end of flowering which helps combat mold issues in humid environments and ensures that every bud site gets enough light. The yield potential is impressive, especially outdoors, and the production of resin is over the top. This is the case when you don’t know what to do with stems and branches: they are covered with resin the same as nuggets and sugar leaves. Throwing anything away seems like a waste. The indica leaning high is knockout strong and sedating. The autoflowering version of Gorilla by Dinafem is very good too and highly recommended. 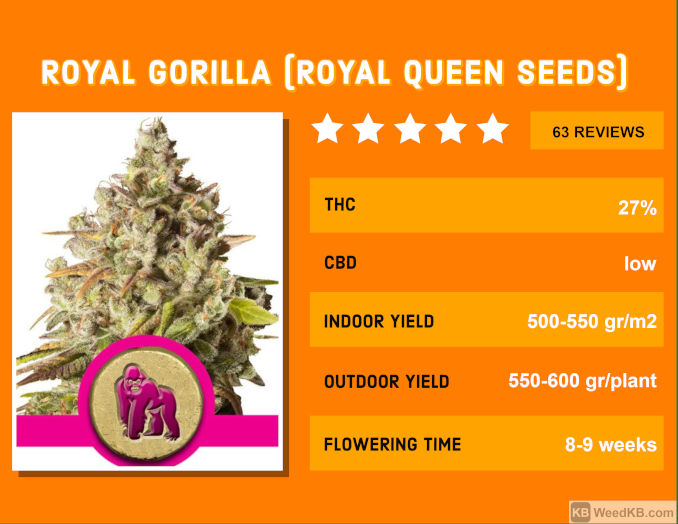 Royal Queen Seeds are among the big guns of the cannabis industry, and their version of the Gorilla strain is top-notch. The yield indoors can be as high as 550 g/m2, although in outdoor grows it’s not the most productive one in our list. Buds are rock hard and heavy, taste sweet and earthy and with notes of pine and lemon. The stone, though couch-locky, is also very stimulating mentally. Patients with depression will appreciate the happy euphoria this strain creates. 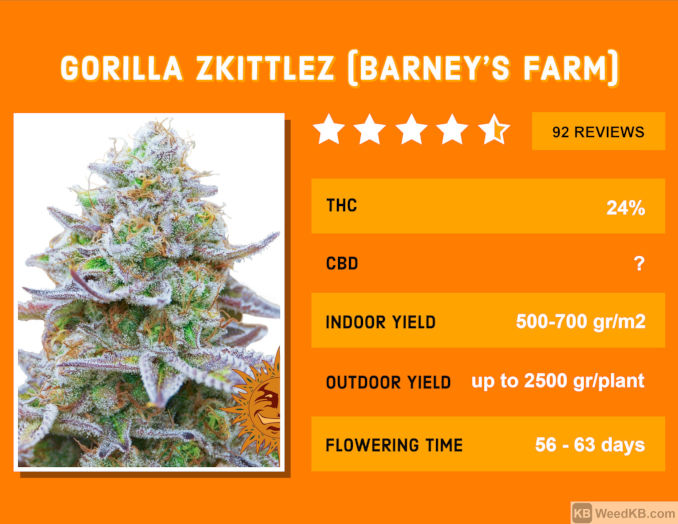 Barney’s Gorilla (crossed with Zkittles) is so popular that there’s tons of information and reviews from growers and smokers alike. This strain has the classic 40/60 sativa/indica ratio, is a massive yielder, especially outdoors, and boasts a respectable 24% THC. So it’s a bit milder than some other versions – meaning that you won’t ‘white out’ every time you smoke it. Still, newbies beware: the Gorilla Skittle strain is some powerful stuff. Smoke it in moderation, and you’ll find it at the same time physically relaxing (with expressed pain-relieving properties) and very thought provoking and even philosophical. Perfect for those who love to meditate on weed. 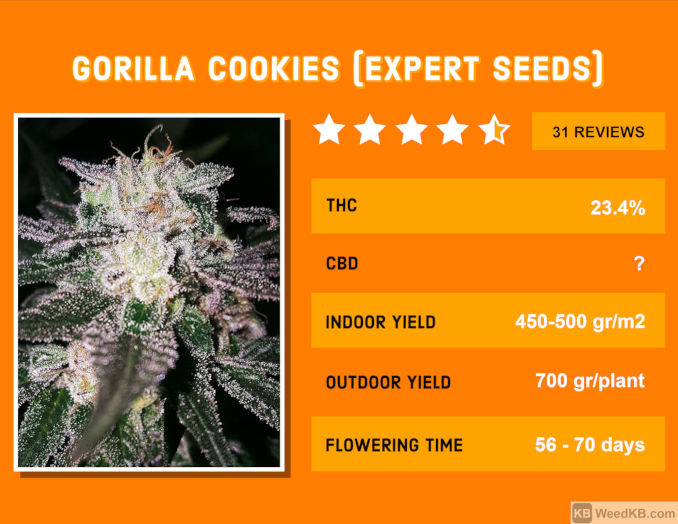 The explosive combination of Gorilla and Girl Scout Cookies genetics promises great things from their hybrid, and Expert Seeds fulfilled this promise completely. Their Gorilla Cookies strain not only boasts high levels of THC, but is also rich in CBD. It’s of great value to medical patients and those recreational smokers who tend to get paranoid from too much THC. The added bonus in this Gorilla variety is that it finishes a whole month earlier outdoors than the rest of its peers. And the yield, according to reviews, isn’t affected by the shortened flowering period. 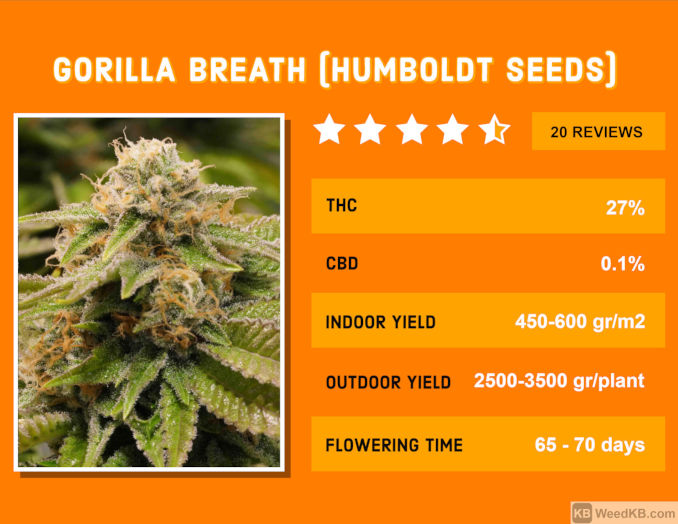 Humboldt Seeds have always been a supplier of high-yielding genetics for the Californian medical marijuana industry. Their Gorilla Breath strain can bring in as much as 6-8 pounds per plant outdoors. Its genetic makeup leans heavily to the indica side thanks to the injection of the OG Kush Breath DNA, and the same genes make sure that the effect is cerebral, rather than physical: it is mentaly stimulating and awareness enhancing (true to its OG Kush heritage), while the Gorilla parent made its offspring extremely resinous and frighteningly potent. Both producer info and customer reviews point to the plant requiring some attention and skills. 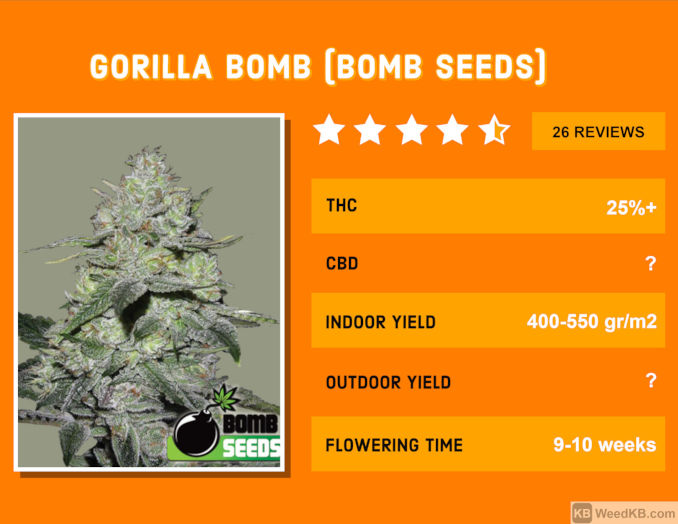 If there is a variant of Gorilla that really shines in organic setups, it is this hybrid of GG#4 and THC Bomb bred by Bomb Seeds. The yield is not really insane, but well above average. However, the smoke is so strong that you won’t really need much. Prepare to be blasted by the strain’s complex and unique flavor: a cocktail of citrus fruit and fuel with very pronounced sweet notes of chocolate. Another great trait of this strain is that it’s sativa dominant, so that effects are really uplifting if you don’t overindulge and become a creative and thinking, but perfectly immobile couch potato. 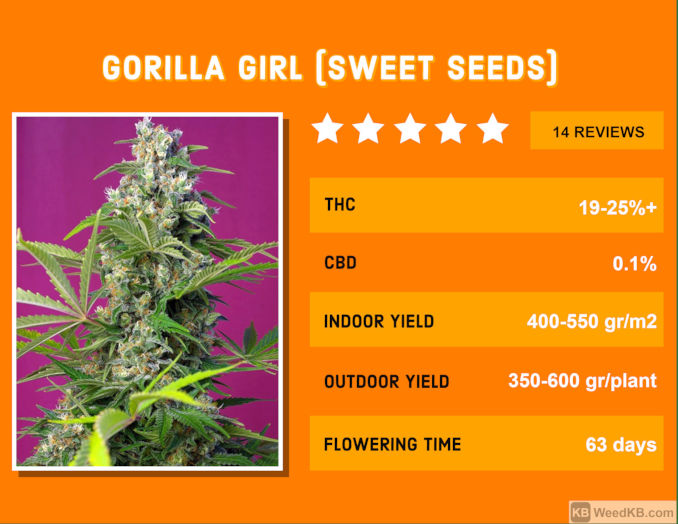 Another sativa leaning hybrid in our list. This one combines GG genetics with Girl Scout Cookies, and specifically its famous Thin Mints phenotype. Gorilla Girl strains by Sweet Seeds boasts high levels of terpenes that provide the smoke with rich notes of cypress wood, earth, and citrus. This variety is great for those who like plants with a lot of side branches. You can further increase their number by topping and LST. As a result you’ll get countless bud sites, all covered in resin and promising super potent smoke. The effects are stimulating and exciting.

In our Gorilla Glue strain review, we’ve featured only a tiny fraction of all GG versions and their crosses with other strains that you can find on the market today. These are probably more well-known, but the rest come highly recommended as well. If you hear ‘Gorilla’, think ‘resin’ which means THC which translates to potency. With Gorilla genetics, you can never go wrong.

With the original Gorilla being such a popular international phenomena, it was a matter of time before breeders introduce some form of autoflowering Gorilla Glue or other. And today, there’s a great number of Gorilla […]

Making a choice for feminized seeds vs regular isn’t always easy. When you go to a seed shop, all you see is feminized seeds. Most customers just buy whatever everybody else buys, but some people […]

Can Feminised Seeds be Cloned and Kept as Mother Plants?

The feminization technology has been around for close to 30 years now, but some people are still uneasy about this ‘new’ invention. My personal opinion is that, for a casual grower, feminized seeds are better […]