We were curious how easy it was to make feminized seeds with colloidal silver at home. So we ran a little experiment and got more than 1500 viable beans without any issues. You too can do the same and make a nice stash of female plant seeds for yourself by following these step-by-step instructions.

But let’s start with a bit of theory (you can skip this part and get down to business straightaway).

What are Feminized Seeds, and How are Seeds Feminized?

In nature, cannabis plants have two distinct sexes: male and female. However, only female plants produce buds for smoking. And if these buds catch some pollen, they will be subpar in quality because they will be full of seeds and not so big and also less resinous. That’s why growers who use regular seeds must watch their plants closely and cull all males in their garden as soon as they reveal their sex. Not very convenient, is it?

It all changed with the introduction of seeds that grow into fem plants in 99% of cases. They were named feminized seeds. So, are feminized seeds always female? In the majority of cases, yes, they are guaranteed to be female. However there are ways to make fem seeds hermie, meaning they will turn male or at least produce a few male flowers inside female buds. This can happen for seeds with weak genetics, or it can be a reaction to stress.

And this is exactly the feature that is used for manipulating feminised plants into producing feminised seeds. You don’t need any males for that. If you use a male to pollinate a plant grown from a fem seed, the result will be a bunch of regular seeds. And if you want fem seeds only, you should use one female plant as mother and another female plant as father. Or, alternatively, you can opt for self-pollination: when a single plant is used to both produce pollen and grow seeds.

There are several methods to make a feminised plant turn male. We won’t discuss here the most barbarian one — when breeders subject their plants to high levels of stress and they are turning hermie as a result. Although, believe it or not, the first commercially available seeds were made exactly this way, back in the early 1990s. You may guess the obvious drawback of such seeds: plants grown from them often become hermaphrodites even under normal conditions.

There is a less invasive method that modern breeders use. I’m talking about spraying a plant (or an individual branch of a plant) with a colloidal silver solution. This changes the chemistry inside the plant to make fem seeds male, and does so without any stress. As a result, we get seeds on a female weed plant without making them prone to hermies.

First, you need to make a colloidal silver generator and use it to produce the solution for your feminized seed spray. It’s unbelievably cheap, quick, and easy. Judge for yourself by clicking the link above and reading our step-by-step guide. The result should look more or less like this: 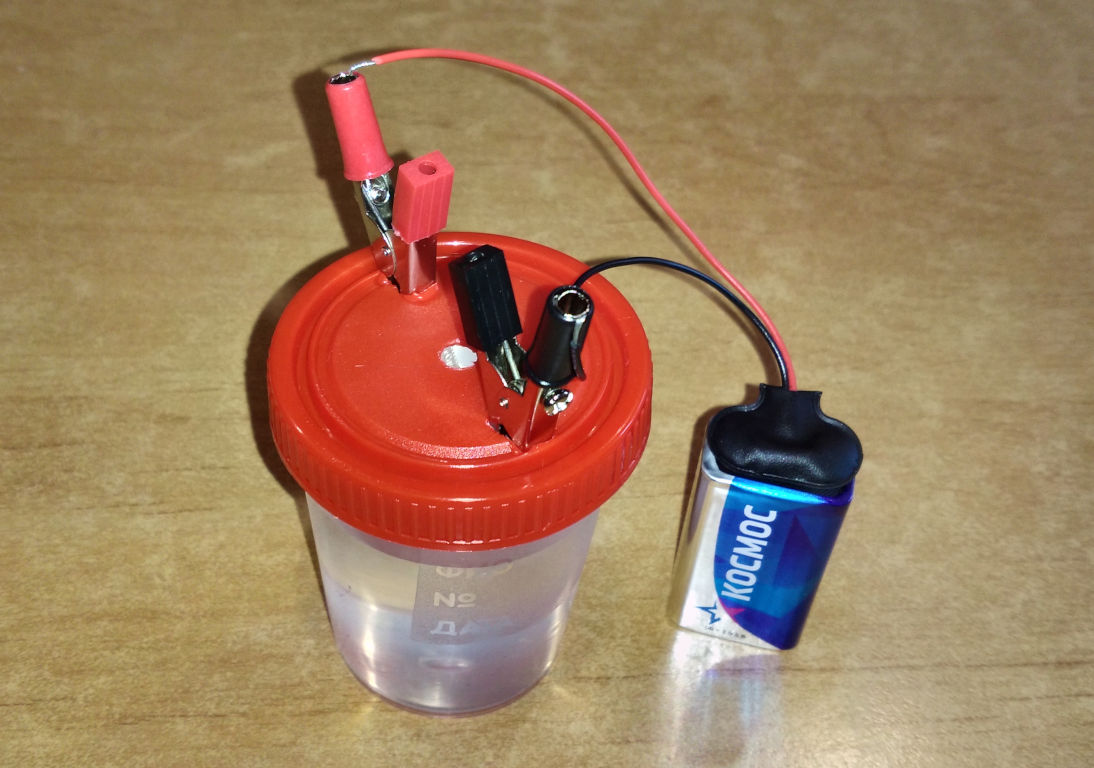 You should start using your feminised seed spray on a plant as soon as it starts flowering. You can apply it on all branches or just one. In the latter case, cover the rest from spatter. Please remember that silver is a toxic heavy metal and can poison you. You should never smoke colloidal silver weed. 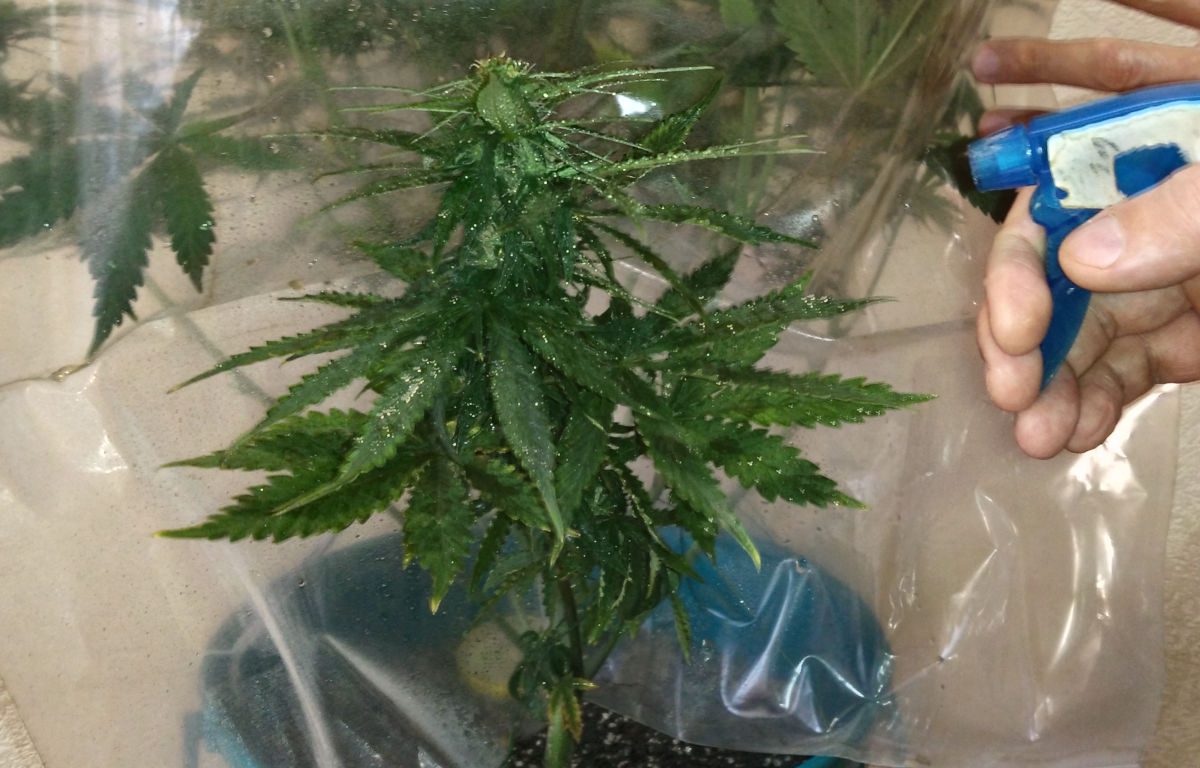 It had taken us 4 weeks before we saw clearly that male flowers began to form. It was our first experiment, and we wasted many days applying the solution with a paintbrush. Don’t do that. It’s stupid. Just cover the rest of the plant with a piece of plastic and spray the chosen branch until it’s thoroughly wet. Do it once a day.

At some point, you’ll notice little green balls appear among female hairs (pistils): first closer to the top, then further down. Continue to apply colloidal silver spray until male ‘balls’ completely oust female pistils and start to look like a bunch of grapes. Only then you can stop spraying. 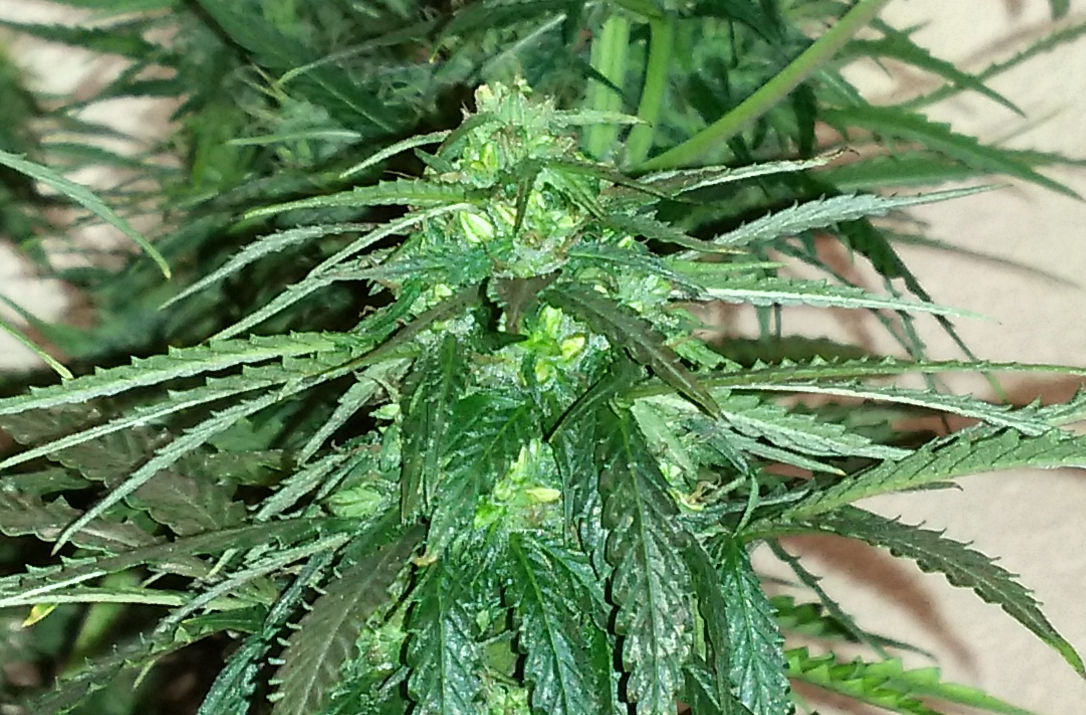 And this is how another branch on the same plant looks. It was not sprayed, so it only has female flowers: 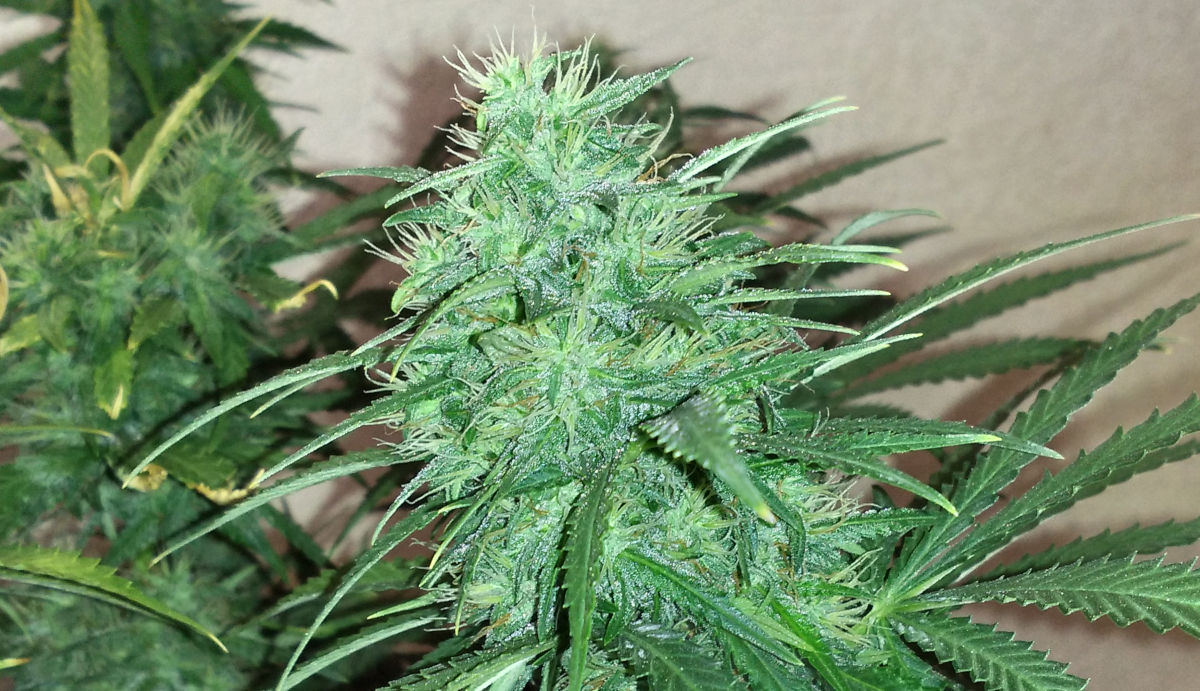 After another month the male flowers will turn yellow and start to open: Pollination is in full swing now, even if you don’t see the pollen. It consists of millions of tiny particles, and they fly everywhere.

Btw, pollinating buds at such a late stage of flowering is not the best idea. It would be better if the male pollen were ready a couple of weeks earlier, when the buds weren’t that mature. That would result in a) more seeds, b) less time spent, and c) better quality seeds. Well, we’re not sure about c), but some people on forums say it’s true.

When the branch with male flowers on it is fully mature, cut it, place it on a table, and rub it with your fingers until all yellow flowers fall off: 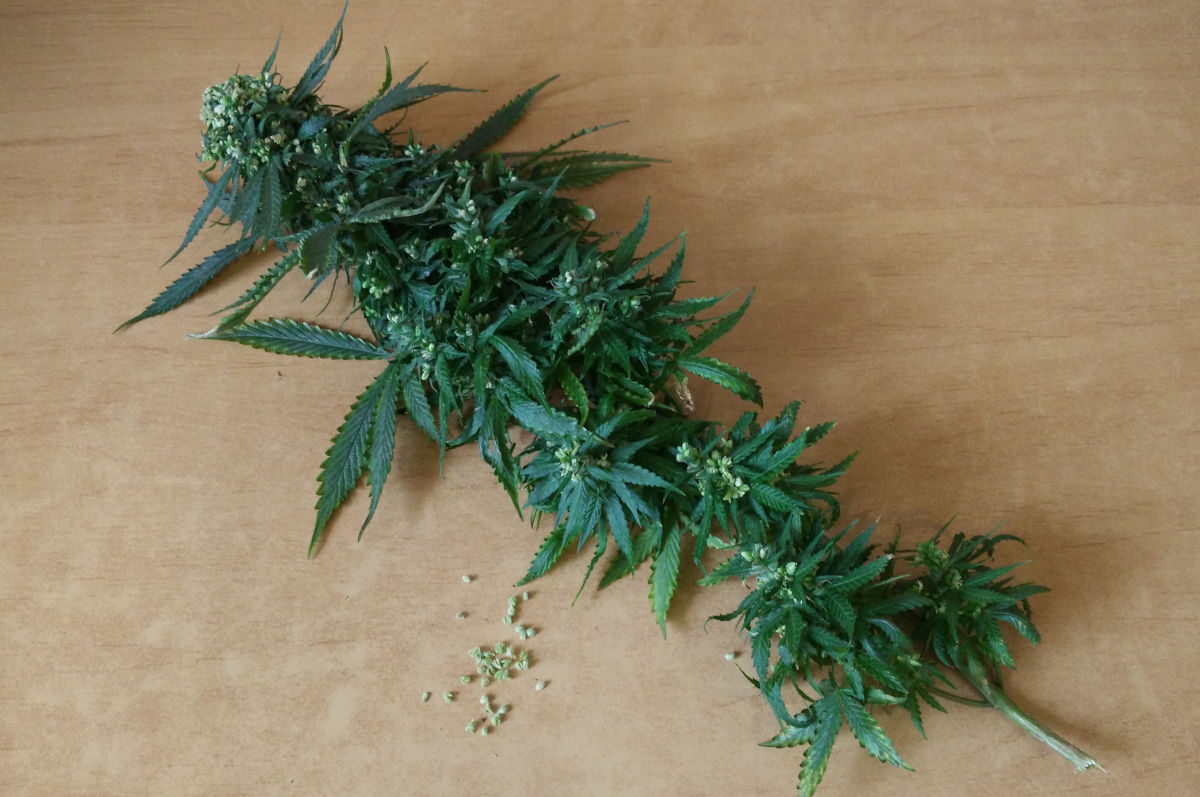 Then move the flowers this way and that with a credit card. The pollen will stick to the card’s edge. Shake it off into a separate heap: 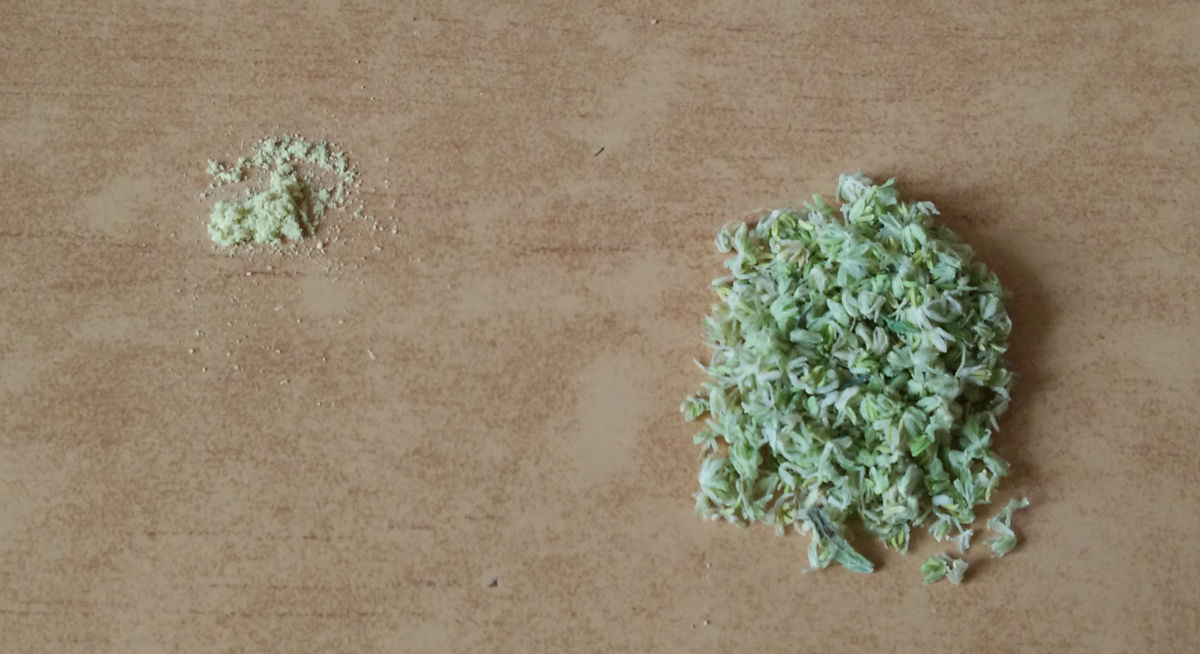 To store and later use the pollen more conveniently, you can mix it with the equal amount of flour: 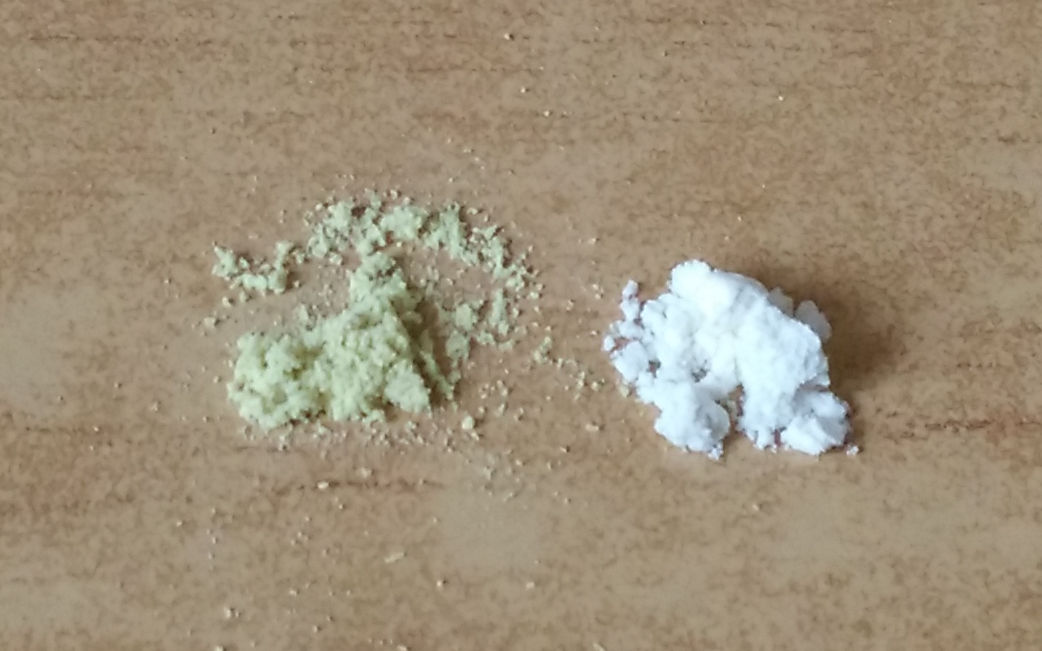 We put the mixture into an empty gelatin capsule and placed it in the refrigerator for storage.. 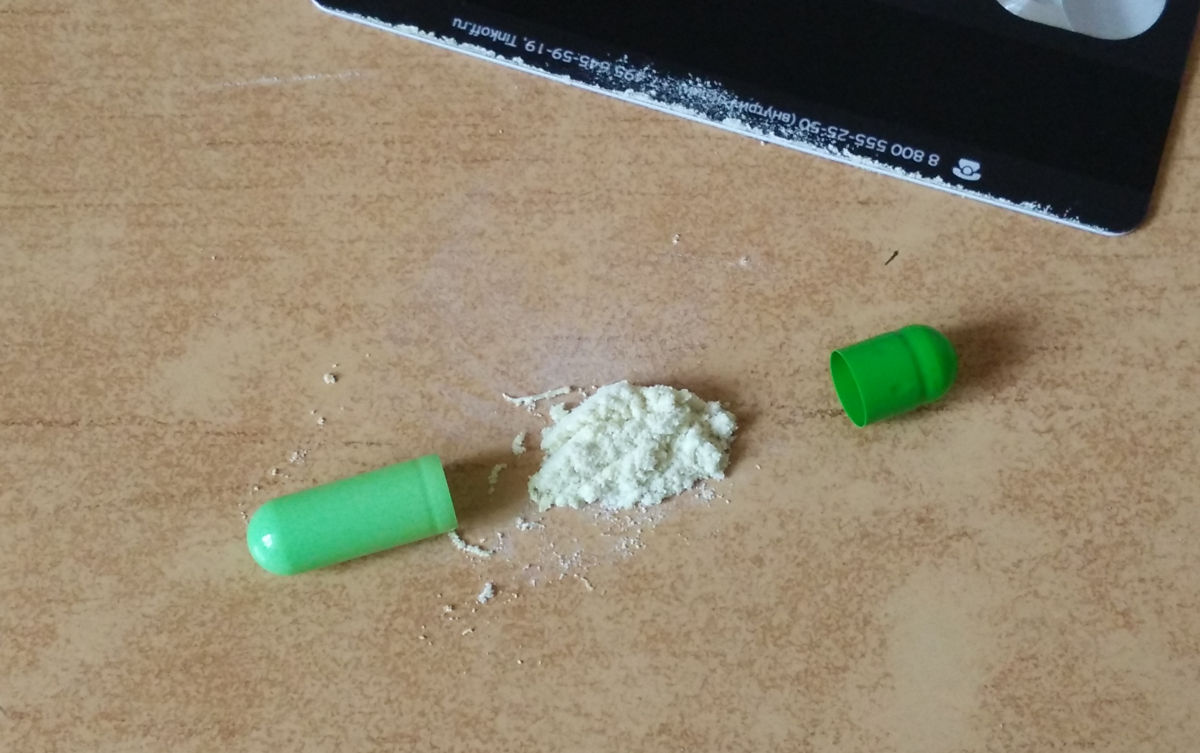 Let me stress that we never used the pollen harvested this way to sprinkle on the plant. All pollination happened before we cut off the male branch. The seeds were fully mature 3 weeks after that. In this photo, you see only some of them. Later, we harvested at least as much. 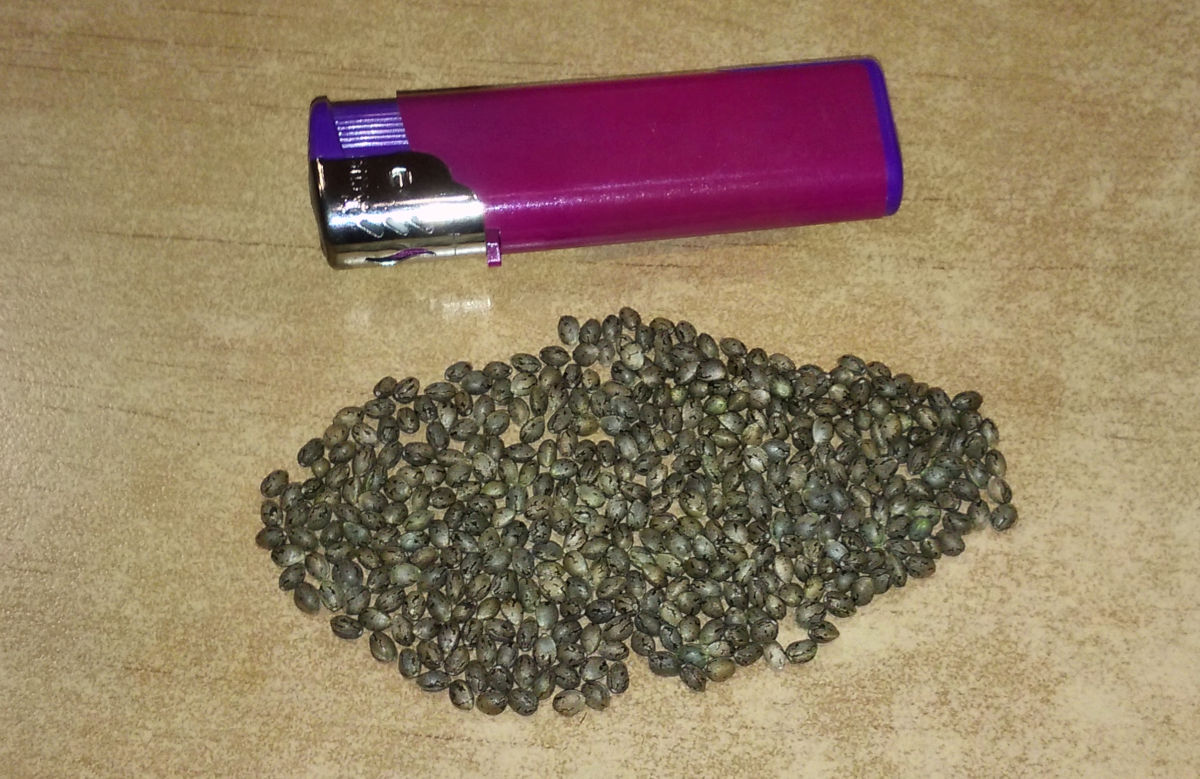 How Soon Can You Plant Seeds After Harvesting Them?

We spent some time looking for an answer. People on forums say that the fresher the seeds, the lower germination rates. If you want to have good germination, give your homemade seeds some time to dry. Let’s say a month or two. It would be enough to degrade the hormone that prevents seeds from sprouting.

Our Experiments with Self-Pollinated Feminized Seeds

Over the next couple of years, we did a lot of experiments with our homemade seeds. The germination rates were always close to 100%, although, we must confess, we handled the process in a most off-hand manner. It’s understandable when the seeds cost you pennies.

We brought several plants to maturity and can say that they are very true copies of the parent plant. All fems, no hermies. All start to flower automatically after 2.5-3 weeks, all have the same height as the parent, the same length of the flowering period, the same structure of buds, and the same type of high. We liked the original plant, so we also liked its copies.

Related Post  Autoflower Clones: Don’t Try to Find Them for Sale. Here’s Why

Making your own feminized seeds is fairly easy. If you want to make copies of an autoflower, this is the only way. If you want to copy a photoperiod strain, it works great as well, but you also have the option of taking cuttings. Cloning marijuana is quicker, but seeds are easier to give away or sell. Believe us: with our little harvest of seeds. we’ve made a lot of people happy.

The feminization technology has been around for close to 30 years now, but some people are still uneasy about this ‘new’ invention. Our personal opinion is that, for a casual grower, feminized seeds are better […]

In this post, I’m going to teach you how to obtain a colloidal silver spray for plants using a homemade colloidal silver generator. You can assemble one with nothing but a knife and a pair […]

Bag Seeds and What to Expect of Them

Novice growers keep asking questions about bag seeds all the time. A girl I know has recently fired at me a series of questions that she thought no one would ever answer. I’m sure at […]