When you grow cannabis of any variety, either photoperiod or autoflower, temp and humidity are the number two and number three most important conditions. Number one is light, number four is CO2.

Autoflower temp and humidity requirements are practically the same as for cannabis plants in general. Autoflowers thrive with day temperatures around 23–28°C (73–82°F) and a drop of no more than 5–10 degrees at night. The humidity should be ideally between 40 and 60%. Ruderalis genes presumably make autoflowers more cold-resistant.

It’s important to keep temp and humidity in your autoflower garden within the acceptable range because otherwise plants slow down photosynthesis or stop it altogether. Cold stress or heat stress also shock weed and stunt its growth. So does very dry air, while the opposite—too much humidity—can cause issues with mold and bud rot.

Dealing with excess humidity is especially important during the flowering phase. When buds are getting fat and dense, mold and bud rot are very common problems. Novice growers don’t even imagine these problems exist—until they see their entire crop spoiled beyond salvation.

Especially dangerous is the temperature drop when lights go off. The air quickly cools, can hold less vapor, and the excess vapor condenses as dew on every surface, including buds. Coupled with low temperatures, this creates a perfect environment for mold growth.

Btw, one way to fight mold is to defoliate your autoflower at certain moments and thus prevent stale air inside the canopy.

How to Control Temp and Humidity Indoors

Start with purchasing a thermometer and a hygrometer. Ideally with remote sensors so that you can place them inside the grow tent while keeping the monitor outside it. This will allow you to keep track of temperature and humidity without opening the tent. Both the thermometer and the hygrometer should be placed at canopy level.

Proper ventilation is the single most important thing that will take care of temperature and humidity, as well as a constant supply of CO2-rich fresh air. In most cases, an extractor fan alone is enough, especially if it has adjustable speeds. The more advanced extractor fans for grow rooms have temp and humidity sensors of their own. They can be programmed to keep environmental conditions at the desired level.

Experienced growers may replace ventilation with air conditioning. In this case, a grow room needs to be hermetically sealed and requires a source of CO2, such as CO2 tanks. It’s doable but rather complicated for an amateur grow.

While too high temps are a constant worry for many growers—because grow lights generate a lot of heat—low temperatures are less frequent. Usually, this happens when people grow in a garage, attic, basement, and other such spaces.

It can get especially cold at ‘night’—when lights are off. However, with autoflowers, you don’t have to turn off lights at all. Most autoflowering strains can be raised from seed to harvest with a 24/0 light schedule. But if you feel like nighttime is necessary and are worried about a temperature drop, buy a thermostat-controlled electric heater.

If the air is too dry, you can use a hand mister to regularly spray some water on tent walls and other surfaces. Or even plants themselves although not during flowering, or else you’ll run the risk of mold.

You can use such a simple ‘device’ as a towel on a coat hanger with one end dipped in water. The towel will draw up water like a wick and then evaporate it. You can increase the rate of evaporation by making a fan blow on the towel.

However, a more serious approach would be buying an electric humidifier. It needn’t be very big. Even a bedside humidifier may be enough for a 3’x3’ grow tent.

If you have the opposite problem—the relative humidity in your grow room is too high—you can try and reduce evaporation by mulching or covering the surface of your pots. Also, make sure there are no open containers with water in the tent. However, the plants themselves create a lot of vapor in the process of transpiration, so you probably can’t do without an electric dehumidifier.

Autoflower Temp and Humidity Changes from Seed to Harvest

We already mentioned the importance of decreasing humidity during the flowering stage. And also explained the reason. Now we can show more specifically how autoflower temp and humidity requirements change throughout a plant’s life cycle.

The table below shows just that, along with the issues you may have if your temp and humidity readings are way off the mark.

If you can’t keep your environmental values within the given ranges, don’t lose sleep over it. It’s not really an exact science. Just keep in mind two things:

Again, you may note that the flowering stage requires special attention in terms of autoflower temp and humidity. We already mentioned the risk of mold and bud rot due to low temperature and high humidity.

The other concern is the concentration of THC and terpenes (aromatic substances) in buds. Too high temps during flowering cause terpenes to evaporate, making your smoke bland and flavorless. And the same thing happens when you dry and cure your buds after harvest. As for THC, the heat either suppresses its production or ‘burns out’ what’s already there. In either case, buds grown in hot conditions tend to be less potent.

When Autoflower Temperature and Humidity Are Off: Examples 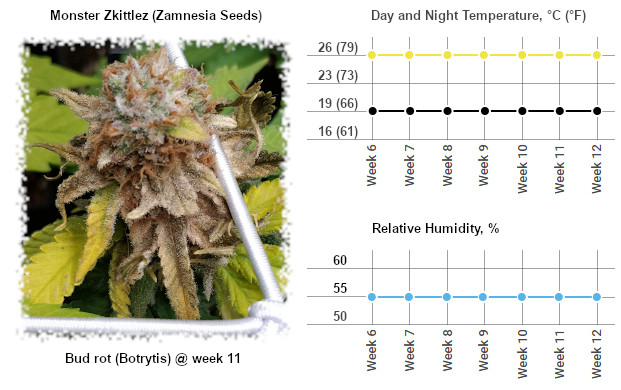 The grower kept the relative humidity too high (at 55%) in flower and discovered bud rot in week 11. Bud rot, or botrytis, is a kind of fungus that loves high humidity. As for temperature, botrytis thrives when it’s colder than normal or there is a sharp drop in temp between day and night. However, high temps coupled with high humidity may also cause bud rot. 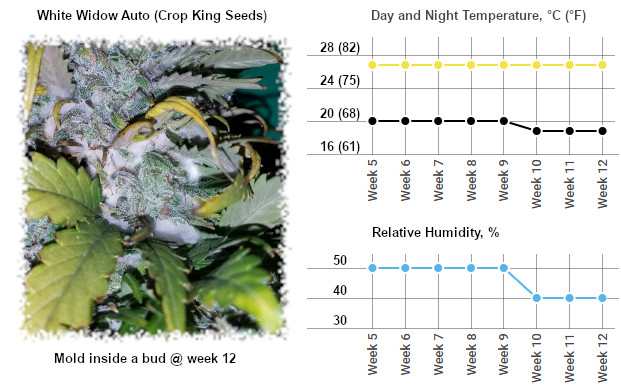 We can’t say that in this grow the temperatures and the humidity were really that wrong. The day temps might have been too high, and the difference between day and night too great. Also, the relative humidity could have been lower for the whole of the flowering stage, especially in the last couple of weeks. The mold probably appeared because the buds were so huge and dense, and the slightly wrong temp and humidity played their part, too. 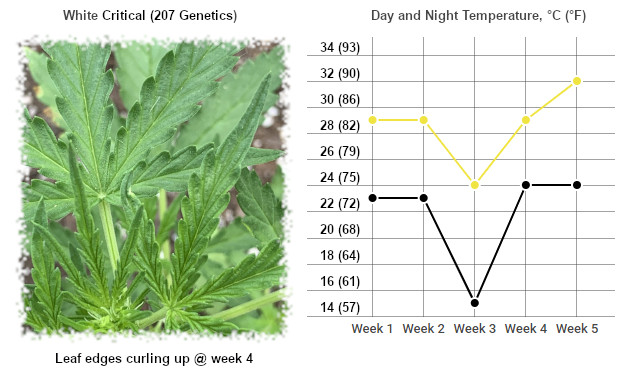 In this outdoor garden, there were several autoflowering and photoperiod strains, but only one plant reacted to summer heat with cupping leaves. This symptom is indeed very often the consequence of heat stress, but sometimes it is due to calcium deficiency. What is different about calcium deficiency is the presence of black spots on affected leaves. 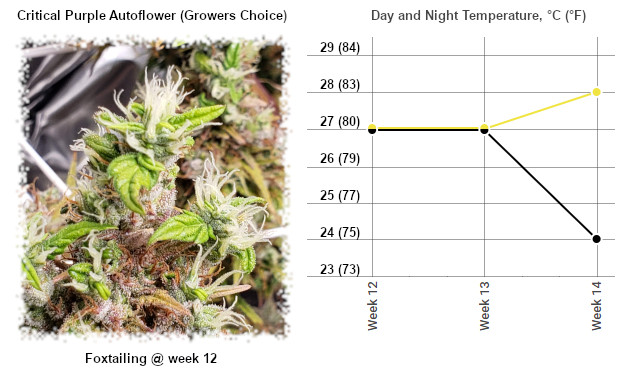 At the end of this grow, the temperatures ran out of control. Especially the night temperatures which were the same as day temps for two weeks. And that was the most likely reason for foxtailing which is the growth of new elongated shoots on maturing buds. 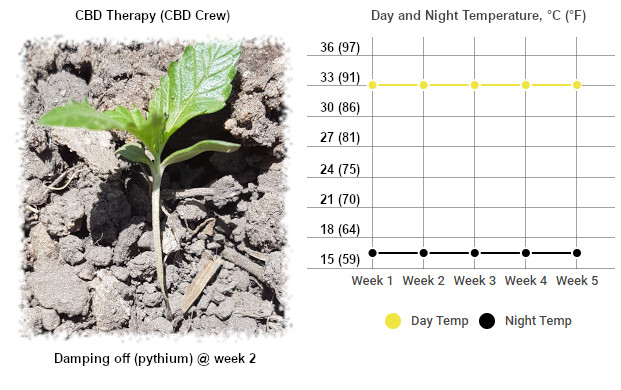 The grower made a mistake of planting his outdoor garden in the middle-of-July heat. At the same time, the nights were rather cool. This temperature stress weakened the seedlings and made them susceptible to pythium, aka damping off. As a result, the stems just above the soil thinned and the seedlings fell over. 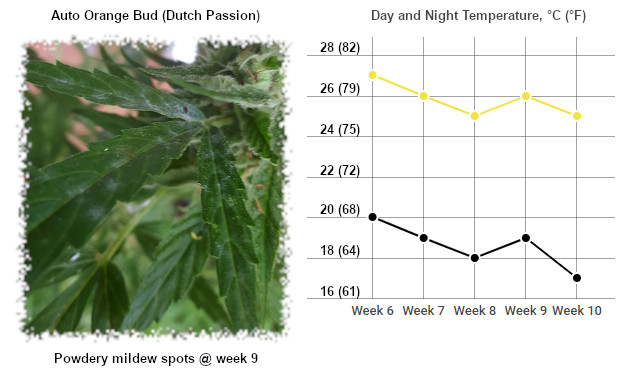 In this outdoor run, the autoflowers were finishing in the middle of autumn when warm days and cool nights led to the dew forming on leaves and causing powdery mildew. The grower didn’t monitor the relative humidity of the air, but it doesn’t matter. When the dew forms, it means the RH is 100%.

Indicas and sativas have different genetic heritage, so keep it in mind when planning for your autoflower temperature and humidity.

Frankly, if you grow autoflowers, all this is of minor concern. Most autos on the market today are more or less well-balanced hybrids with the indica/sativa ratio fluctuating in the 60-40 to 40-60 percent range. When buying such seeds, it’s a toss of a coin which phenotype you’ll get — indica-or sativa-leaning.

Outdoors, autoflowers are very rewarding because you can bring them to full maturity in any 2-3 months of the growing season. Even in very cold climates, there are at least 2 months of what may be called summer weather. And if the season is long enough, you can have several consecutive harvests. Or choose the optimal period in terms of temperature and humidity.

We’ve written a separate post about outdoor marijuana temperature (it has all the numbers you’ll need). Let’s stress just a couple of points here:

Btw, transferring an autoflower outdoors can be stressful for its root system. Click the link below to learn just one hack of how to reduce transplant shock.

Greenhouse Could be a Better Alternative

In colder climates, it’s best to plant your autoflowers in a greenhouse which will protect them from cold weather, rain, and strong winds. A greenhouse can also extend your growing season by two whole months.

The one mistake you should avoid is sealing your greenhouse completely for the night. The thing is that when the air inside the greenhouse cools down on a cold night, heavy dew forms on everything. A couple of nights like this and your crop will begin to rot, get covered by powdery mildew and what not.

So leave the greenhouse open for the night to let the excess moisture evaporate. It’s better when it’s very cold but ventilated than kind of cold and sealed off hermetically.

Although we were talking about autoflower temp and humidity, the general principles apply to any weed variety. If you want vigorous and healthy growth without any issues, try to always be in control of environmental conditions. If you manage to keep them within the given ranges, you’ll get tons of chunky heavy buds at harvest. Happy growing!

All images in this post were taken from GrowDiaries, the world’s largest weed growing community.

Cannabis Heat Stress: How to Spot, Prevent, and Treat It

Most of you know how important it is to control the temperature in your weed garden. You also understand that when it’s too hot for too long, the plants will begin to suffer and show […]

Poor marijuana germination rates are the first issue that inexperienced growers face. Recently, a customer said he failed to germinate any of the seeds he had bought from me and complained. I decided to show […]