There are probably dozens of techniques of germinating cannabis seeds, but here are three most primitive ones (only two of them working)

Recently, a customer failed to germinate any of the seeds he had bought from me and complained. I decided to show him that my seeds were all viable and could be germinated successfully even under most basic conditions. Here’s how it went. 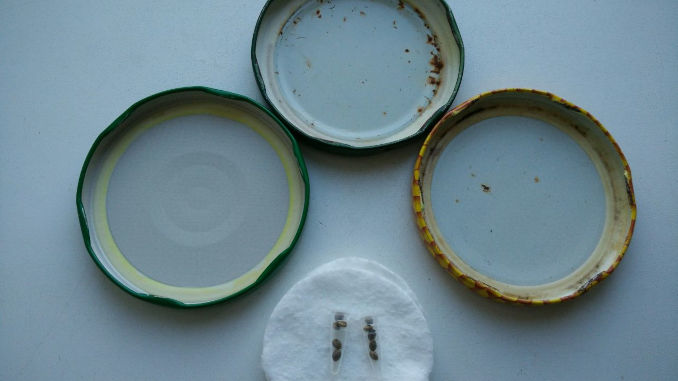 Into one cap, I just poured a little tap water (of drinking quality) and dropped three of the seeds on the surface.

Then I soaked all the disks in the same tap water. I placed one disk into a cap without squeezing out the excess water and put three seeds on top. And then I squeezed the remaining two disks so that they were moist, but not wet through. I put the remaining four seeds there.

I placed all three caps on a window sill and covered them with a book because cannabis seeds need darkness to germinate. The temperature was about 77° Fahrenheit (25° Celcius).

After 64 hours the results were as follows:

Also, between the disks, the tap roots were the longest. 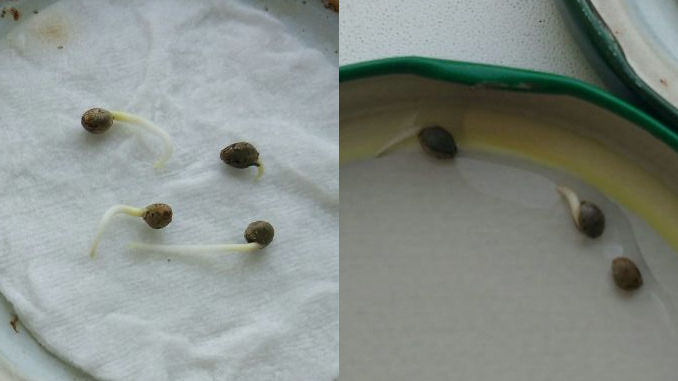 What is the rationale behind this experiment? All too often, novice growers ‘drown’ their seeds in too much water. The thing is that embryos inside the seeds need oxygen to start growing. If you deprive them of oxygen, all processes stop. It happens when you put them too deep in the soil and water excessively. The same thing can happen when you don’t squeeze out the cotton disks.

So basically, pot seeds can be successfully germinated on the surface of water because below them there’s moisture and above them – oxygen, and there’s nothing to stop them from popping. I thought that by the same principle they would also easily germinate on the surface of a wet cotton disk, but the experiment has proven me wrong.

The method of germinating marijuana seeds between cotton disks demonstrated the best results in my experiment. No wonder this is the standard method for thousands of weed growers worldwide.

I also plan another experiment where I’ll be germinating one batch of seeds between squeezed out disks and the other one between disks that are dripping wet – just to show you how detrimental too much water is for the process of germination. Stay tuned.

Ha-ha! Great hypothesis! I’ve finished the experiment, and it was the exact opposite of what I had expected. As you can see on the photos below, the seeds that were germinating between wet through disks have higher germination rates (5/5) and have on average longer tap roots (some of which are already covered by a lot of tiny ‘hairs’).

So I propose another hypothesis (hope it’s not as far off the mark as the previous one): excess moisture is okay provided that seeds have free access to breathable air. It’s what happens to plants in DWC where their roots float in water all the time, but get all the oxygen they need in the form of bubbles from air stones. So, if you use very wet cotton disks (or paper towels), don’t press them too tight against each other. Let there be a bit of space between them for embryos to breathe.

Sometimes, marijuana seeds are too weak or too old to sprout quickly, so you need to use some techniques to help them germinate. In this post, I will describe just one method – cannabis seed […]