The very fact that we compare outdoor vs greenhouse vs indoor weed is the relic of the prohibition era. Because you don’t grow your own papayas and mangos. You import them from countries where they are produced naturally and cheaply. However, odds are that some grower in your area cultivates a Mango strain or a Papaya strain. And more often than not they’re doing it under artificial lights.

50 years from now, we’ll all be smoking Thai weed, and Moroccan hash, and maybe Colombian or Jamaican genetics. In short, landraces that baby boomers used to enjoy back in the day. Of course, we’ll be smoking local weed, too — the way we often eat locally grown tomatoes. But let’s be honest: nobody in their right mind sets up their tomato gardens in warehouses, basements, and garages. Any future cannabis grow-op will be using the power of the sun.

But we have a very different legal landscape at the moment, so let’s see what this means for the quality of the weed that we smoke and grow.

The main difference between outdoor farming vs indoor farming is that we make use of sunlight in the former case and artificial light — in the latter. The sun produces light of a broader spectrum. This naturally leads to the production of a broader range of cannabinoids and terpenes in the buds and a different kind of high.

Most smokers know about THC which is the main chemical in marijuana responsible for making you high. Recently, another substance called CBD has been making headlines, thanks to its many health benefits and its huge healing potential. However, weed contains dozens of other cannabinoids and also many aromatic terpenes, and all of them have a potential to influence the high. It’s called the entourage effect. So, with its greater number of cannabinoids and terpenes, outdoor cannabis influences users in a less bland and more nuanced way.

Okay, the experience is richer, but what about the potency?

The THC level of a particular weed strain depends mostly on the underlying genetics. And it so happens that many of the most potent modern varieties aren’t adapted to outdoor cultivation in all but a handful of climates.

If you live in California, or in a Mediterranean country like Spain and Italy, or possibly in some New England state, you can probably grow a highest-THC variety. Meaning you have a good chance of bringing it to full potential before it gets too cold and rainy. But in most other climates (like Canada or the UK), you’ll have to choose some faster-flowering outdoor varieties, and those are bred for their speed and not necessarily for their high THC percentage. And the harsher your climate, the more the cannabis genetics that you can hope to bring to full maturity will resemble hemp rather than medical marijuana. This is the reason why outdoor THC content is on average significantly lower.

To recap, natural light is good for outdoor marijuana trichomes and THC levels, but often there’s simply not enough sun when it matters most, that is in the final weeks before the harvest.

So what should you do if you’re not blessed with a warm and sunny climate? Well, one option will be using a greenhouse (more of it below), another — to choose outdoor autoflower marijuana seeds. With autos, you don’t need a full-term growing cycle ending in October or November. They can finish in 2-3 months from sprouts and during the period when the sun is at the peak of its activity and thus conducive to the maximum THC percentage a strain is capable of.

Other Aspects of Bud Quality in Outdoor vs Indoor Plants

We have said it once and we shall repeat it just one more time and be done with it. Under subpar conditions in colder climates, it will be difficult to grow high-potency stuff consistently, if at all.

So let’s compare only those cases where it’s totally possible to grow the same strain both indoors and out. What can one expect?

Indoors, artificial lights together with the complete control of temperature & humidity and other environmental variables like CO2 levels allow for more consistent results because… well you are in control of everything. Outdoors, very little depends on you and anything can happen. So, you risk not only some variance in bud quality, but also losing your crop altogether. Possible culprits — hail, heavy rain, strong winds, cold spells, early frosts, and heawaves/draughts.

But suppose nothing bad has happened. How will outdoor and indoor nugs compare then? There are still other risks in an outdoor grow operation.

Wat Can be Wrong with Outdoor Buds

In short, if you grow outdoor weed yourself, be aware of these issues and try to prevent them. And if you buy buds from someone else, you better trust their integrity, especially if the farm is an outdoor one.

Size and Texture of Buds

Grow lights, especially weaker ones, have a notoriously limited effective range. Here’s the inverse-square law in action: if you double the distance from light, its intensity reduces 4 times! This means that buds in the upper portion of an indoor plant can be huge and solid. At the same time, the lowers that are just a dozen inches down the branch are smaller and spongier, less mature and with fewer trichomes. It’s a good practice to trim away those popcorn buds in the earlier stages of flowering (a technique called lollipopping).

In contrast, you can say that the distance from the sun to upper buds and lower buds is exactly the same. (What’s a couple of feet compared to 93 million miles?) So, outdoor nuggets have a potential to be of the same quality throughout the whole height of the plant. And the intensity of the sunlight makes them really dense and heavy.

Indoor growers usually estimate their yields in grams per square meter. This is the figure that you see when you look at the features of a particular strain in a seed shop. Let’s say they promise 500-550 g/m².

These numbers are what you can hope to achieve under most favorable conditions and using powerful enough lights. Most of the time, this means a 600W HPS per each square meter. However, there’s no universal convention here. So, when you see numbers like 800 g/m², it probably means that you have to use a 1000W HPS per square meter to achieve such results.

When comparing their achievements, growers often use another metrics — gram per watt. With an old-fashioned HPS, 1.0 g/W is probably the highest that you can get. And only you work hard enough and know what you’re doing. Modern LED quantum boards can be much more energy efficient and let you overshoot the 1 g/W mark easily. Nevertheless, there’s only so much watts that you can cram into your grow room without burning your plant tops or making them foxtail. So take the grams-per-square-meter numbers seriously: it’s probably the very best you can hope for.

What are the Yileds Outdoors?

As for outdoor weed plants, their yields are expressed as grams per plant. For some smaller, Indica-dominant varieties, the indoor and outdoor figures are very close, say 550-600 g/m² and 700 g/plant. For other genetics, the difference is huge, and some strains are supposed to bring in as much as 10 pounds from each of the tree-like monsters.

You’ve probably seen photos of those massive outdoor marijuana plants: they are started inside at the end of winter, undergo several toppings, acquire a lot of girth, and become so tall that you need a stepladder to reach their uppermost tops. Big plants like these require chicken-wire cages for support, but let you harvest much more than their indoor counterparts. Though they can easily cover 3 m² of surface area each, their per-square-meter production would still be greater than indoors.

Outdoor vs Indoor Growing: Drawbacks and Benefits of Each

Now let’s quickly recap the advantages and disadvantages of both methods of cultivation and also include those that we haven’t mentioned yet (because they are too obvious): 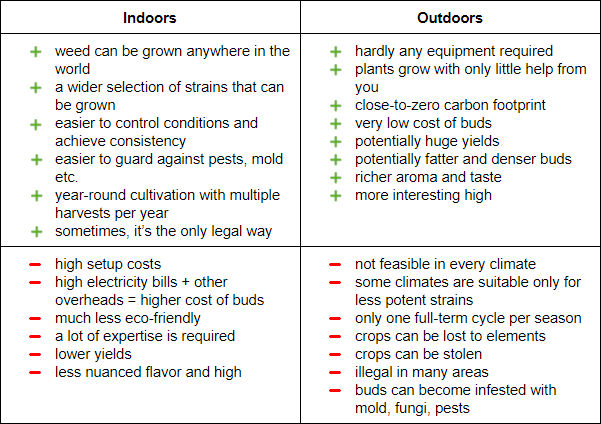 Greenhouse: The Best of Both Worlds

A greenhouse is a perfect option for when you want to combine the free energy of the sun with the ability to control other variables of the growing environment.

It can be as simple as having a transparent roof and walls around your garden because this alone can extend your growing season by a full month in spring and as much in fall. It can also level out too wide swings in temperature and humidity and protect your plants from rain, hail, and wind. It’s basically outdoor growing on steroids.

Or you can use a greenhouse the other way around: create an enclosed and sealed-off space, like a full-fledged indoor grow with all its bells and whistles, but with the sun serving as the source of light (either sole, or primary).

In this case, people usually use the light deprivation technique. It means that you never wait for the fall with its equal duration of days and nights, but use an opaque tarp to cover your greenhouse in the evening and thus create 12 hours of uninterrupted and complete darkness. This way, you can make your weed plants flower at any time of year.

With a light dep greenhouse (which are often fully automated), you can have multiple harvests per year, or even a year-round growing operation, or simply choose the sunniest part of summer to have the flowering period for your buds to make them as huge and meaty as possible.

Cost of Greenhose Weed Compared to Indoor or Outdoor Buds

As for the question of costs, greenhouses fall somewhere in between outdoor and indoor farming, and, the more complicated the setup, the more expensive your buds will be. It’s very hard to find any research with reliable figures, but here are some rough estimates*:

As you have probably guessed, we personally prefer the production of marijuana in greenhouses. Simply because it seems to be the most responsible way to use Nature’s resources while having enough control over the quality of the final product. But everybody’s circumstances are different, and we hope that now you have enough information to make an informed choice. Please tell us what you think in the comments!